The worst degrees for repaying student loans–and how to fix them. (Part 1) 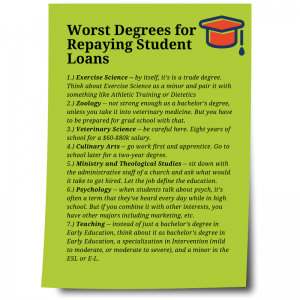 So, your child is finally heading off to college! Of course everybody’s excited. It’s time for your son to start studying what he really wants, or your daughter to start pursuing her passions.

But let’s push the brakes for a second. Unless you want the student to be crippled in student loan debt, you’ve got to think about what your child really wants to do with his or her future…and how you, as a family, can really best afford this.

For example let’s talk about some of the worst majors for repaying student loan debt. And we’re going to use an article I’m citing from CheatSheet.com–in particular in their money career section.

They listed about 15 different ones. I’m just going to pull out about seven and talk about them in a blog series called “Worst Majors for Repaying Student Loan Debt.”

Here’s the first one:

1.) Exercise Science. I see this a lot. I see a lot of students say, “I just really want to be healthy. I love working out and I want to pursue a degree in it.” But here’s a tip: Don’t go get a bachelor’s degree in this. If you’re really interested in exercise science, go get a trade degree in this. Go spend a year or two years doing this because, let me tell you, the starting salaries don’t change for being a personal trainer if you have a bachelor’s degree or not.

But if you do want to turn this into a bachelor’s degree or the components of it let’s deconstruct a little bit and maybe instead of doing Exercise Science as a major, let’s maybe think about it as a minor, and possibly pair it with something like Athletic Training or Dietetics. These are board certified positions that you have to have a bachelor’s degree for that yield in the $40-$60000 starting salaries.

Take that with a specialization in Exercise Science. Now we’re able to spend that in a direction that’s leaning more towards health and body in the Kinematics or the body in movement type of work. So distinguish the difference here–Exercise Science and being a personal trainer, which is a two year path, and a more dynamic four-year approach that will create a higher-paying career.

2.) Zoology. Now let me tell you this and this is important to note. Zoology is a liberal arts degree–which is totally fine, but that means you’re going to grad school. If you walk out with a zoology degree there’s no skill set to it.

Basically, a degree in zoology just means you’ve done a little bit more study in animals than somebody else did. Same way as someone with a math degree has studied math more than the next person. But it doesn’t say you can be an accountant. In order to be a CPA, you actually have to pass the CPA exam and have an accounting degree.

That’s how you want to look at this. Zoology itself is not strong enough as a bachelor’s degree. But if you are taking it into veterinary medicine, it’s a little bit of a different story. But you have to be prepared for grad school with that.

Your interest in animals which is something you shouldn’t back away from. But if you’re interested in animals,  maybe look at Agricultural Sciences and then see how we can transform that into veterinary clinics and things like that for specific breeds. That way, your education will correspond to the work world. And that’s how you want to be able to look at those.

3.) Veterinary Science. Interestingly enough, Veterinary Science or the doctorate in Veterinary Medicine is actually on this list too. And I’ll tell you why. Because becoming a vet is definitely a gallant pursuit. It’s we need veterinarians, obviously. The problem we have for veterinarians right now is that the average starting salary and continuing salary for vets are pretty much in the $60-$80,000 range. But you’re literally going to spend the equivalent of a med school degree. You’re going to spend almost $200,000 on it. The numbers just don’t add up.

Some colleges are starting to make adjustments for this. Actually, Ohio State, which we study pretty regularly because we’re based in Columbus Ohio, is doing something innovative with this. They’re bringing students into veterinary medicine in their bachelor’s degree time frame–so you could actually start on it as soon as your junior year. That way, you’re eliminating eight years of school and making it down to five or six, which makes a little bit more palatable. But they still have some work to do from there. So that’s the inevitable issue for veterinarian medicine.

We’ll come back for Part 2 of this series with more solutions for more majors!